I’ve been working in my #CMALT portfolio. Given that I haven’t yet submitted it for assessment (it’s not quite finished) you might rightly think that a blog post about sharing it is a little premature. Of course you are right – and I won’t actually share it until it has been assessed and (hopefully!) passed sometime in the future. But my intention to share it openly has definitely shaped how I have approached things and to me it’s interesting to reflect on the why and how of that process.

The main reason why I want to share my portfolio is that reading others’ portfolios has been a really valuable part of making my own. I have found it interesting to see how others have build theirs, from the technology used to reflections shared. At times, I have been humbled by what others have achieved (often single-handed) and often I have felt empathy with individuals whom I don’t know, but who were struggling with the same things I have. In what is largely solitary undertaking the portfolios of others have provided inspiration and motivation. 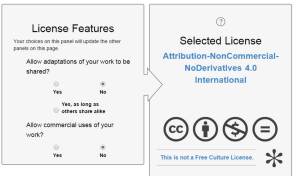 But sharing what is essentially a personal artifact incorporating examples of work and reflection has not been entirely straight forward. My chosen format, Google docs, makes sharing easy. I can even set up a shared folder for additional evidence and control who has access. Licencing, too, I have considered. The most restrictive Creative Commons licence seems like it might work for this purpose. Some of the examples/evidence in the portfolio is already licensed under Creative Commons so that aligns well. I should be able to produce backups, copies for updating and different formats of the portfolio quite easily and that is an important consideration for me – I wanted to make it as easy as possible for me to actually do work on it initially and subsequently keep it updated.

But what about the actual content, what I describe and reflect on – in particular working with other people? What about reflecting on failures?  In most instances I have opted for not mentioning individuals by name, using role titles or generic terms instead. This is particularly important I feel when talking about colleagues in the team I lead. While it hasn’t always been easy, the consideration that what I am writing could potentially be read by anyone has contributed to making my work more balanced. But there has also been tension between accurately describing what I do and respecting the privacy of those I work with. Now that the portfolio is nearly finished I have shared with my staff team for feedback. This way everyone who is referred to has the opportunity to read what I have written and comment on it.

From the outset, the intention of sharing my portfolio has shaped how I have approached my portfolio. It’s been particularly valuable as it has encouraged me to reflect on the guiding principles of the #CMALT framework in my work – one of which is empathy with and willingness to learn from others. In that spirit, I hope that my portfolio can one day be useful to others in similar ways.